In this last post I wanted to show you how I edited the printed wood engravings into digital illustrations ready for a book. In order to not burn myself out by engraving illustrations back to back to back, I would take a break in between each one to compile it into the final illustration. It also gave me the satisfaction of being able to cross it off my list of illustrations.

I had all the spreads pinned to my wall, so I could manage the process and be aware of what was still left to do in the time frame that I had to do it in. Every time I sent a finished illustration to the publisher and they accepted it with no changes, then I could unpin that image, and could visually see my load diminishing. I don't know if you are a list maker, but checking off items on lists is a big motivator in me.
You could also see a glimpse of my manuscript all marked up in the first video I posted in the series. 😉

The process to convert the prints into digital illustrations wasn't hard, but it was tedious at times. All the work was done in Photoshop.

I began by cleaning up all the extra marks from around my images. See the before and after image on the left. Some prints that had a lot of details, took a long time to clean up.

After the images were cleaned, I dragged them into the same file, and converted the different layers into color. This was the fun part. Sometimes I'd spend a while tweaking things back and forth, to get just the right shade and relationship between the colors. 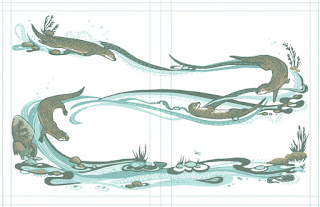 During the process, I had also taken the margins and gutter into consideration, and in the last steps, I would set the illustration in a template I had made, to make sure everything lined up right, and nothing important was too close to an edge to be lost. On the right you can see the above illustration, finished and laid into the template with the margins layer visible.

Everyone at the publisher's side was so great to work with. They rarely had things to change, they were fast to communicate with and they listened to the ideas I had. I really couldn't have imagined a more pleasant team of people to work with on this whole project.

Below is the last video in this series, where you can see more in detail the whole digital part of the process.


I hope you enjoyed this little series on how the book Four Otters Toboggan: An Animal Counting Book, was made. I look forwards to launching the book in March. It also coincides with World Earth Day on April 22nd. Their theme for this year is Protect Our Species - exactly what our book is about! It's a great coincidence and I hope lots of schools will be able to use our book as part of that celebration. We'll have some activity pages related to that theme ready by then.

If you know of schools or other groups who would be interested in illustrator visits, feel free to contact me.

This month I am working on promotional things: stickers, a coloring and activity book, and a kids crate. More of those to come as soon as I get them ready to show you.

Have a great New Year!


Posted by Mirka Hokkanen at 8:19 PM No comments:

Engraving the Illustrations for Otters, Part 3

After all the sketches were done, I waited to have a baby. My hands were getting so swollen at the end of the pregnancy, that it was hard to hold a pencil to sketch, let alone try to do fine detail engraving.

We also moved into a new house right before the baby was born, and I took a month off, so we could pack and unpack our things before the baby came because I knew I wouldn't have time for it after.

As soon as I got a chance to hold an engraver in my hand, I dug back into it. Three kids and illustrating is tricky business, and I did the best I could to balance both sides of the coin. The whole process of engraving all the color layers and finishing them on the computer took from April to end of June.

If you have done printmaking before, then the process of carving a plate and printing is pretty familiar to you. If you haven't here is a brief synopsis: 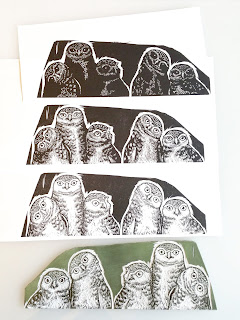 I use sharp engraving tools and a thin plastic called HIPS (high impact polystyrene) to carve the images into. Once the image is carved, I roll it up with ink and print it on a piece of paper on my printing press. While the ink is drying, I took the same printing plate, and carved it some more. I then print the image a second time, on a clean sheet of paper, and then I repeat the process one more time, to get 3 variations of the same image.

See the image on the left. The printing plate is on the bottom and the three printed layers on the top.

I made a video, that shows the process more in depth: image transfer on the plate, engraving and printing process.


I hope you enjoyed that tour into my studio process. I'll add one more process post after this, showing the final steps of editing the engravings on the computer into the final illustrations.

In the last post, I wrote about how I got started with illustrating the book "Four Otters Toboggan: an Animal Counting Book". I showed the original thumbnails of the book illustrations and how I made the first complete illustration for the proposal. After the proposal was sent we waited...

Soon enough we got the exciting news that the publisher wanted to hire both of us for the book. Many emails were sent back and forth in the next months, about the contract, and when that was finally signed by all parties, it was go time for me. The author had already finished her manuscript, and now it was time for me to actually start doing the hard work.

We agreed on a rather long time for me to work on the book, as I was pregnant and about to give birth in the next few months AND we were moving into a new house. My plan was to sketch everything out in detail before the baby, and then carve, print and assemble the final illustrations after the baby.

I started the work by researching every animal: their habitat, distribution, nesting sites, coat variations etc. If I had questions, the author, Vivian Kirkfield, was available to talk. We are Storm Literary Agency mates, and hit it off from the get-go. We have a warm collaborative relationship and I am so happy I've gotten to know her so well through this experience.

When working on the illustration sketches, I liked to jump around the book, leaving the cover as one of the last illustrations. We were still balling around for a catchy title when it was time for me to start working on it.


I tossed about 20 ideas in the hat. Everyone was brainstorming in our parts of the country. Then one night I was thinking about what kids would gravitate to in the book. It was the animals of course- foxes, owls and ... otters. I realized Vivian had already written the perfect title in the book: "Water splashes.  FOUR river otters toboggan down a slide of mud. Dripping onto glazed rocks, they hold fast with furry-soled feet...".

Four Otters Toboggan was the perfect title for the book! Everyone agreed and we added the subtitle an Animal Counting Book. Then I was able to design the cover illustration knowing how big the title was going to be. (See the video for the sketching below.)

I always start sketching with a rough pencil sketch for basic shapes, that then gets more refined. For wood engraving purposes, I then traced that sketch into a light gray silhouette. Then I multiplied that layer, made it darker, and erased areas to make the second layer. The second layer was then multiplied to a third darkest layer, that was then erased again. It was basically a digital way of making a multiple layer wood engraving, that allowed me to plan the final prints in high detail. I ended up changing the grayscale sketches into color half way through, just so I could have everything planned even more specifically, so when the time consuming part of carving the images came, it would go as smoothly as possible.

Below is a mini video showing how I add the different layers on the iPad with the Procreate drawing app:


I also made a longer series of videos of the steps for the illustrations. Here is the first one, that covers the sketching process in more detail:


Hope you enjoy them. Next time I'll walk you through engraving the illustrations. 😀